The United Kingdom today is known for an incredible diversity of native and immigrant cultures, possessing a fascinating history and dynamic modern culture. As a result tourist can find an incredible array of attraction, parks and monuments like Roman villas, medieval cathedrals and civic projects of the Industrial Revolution. The most popular attractions and landmarks are: Edinburgh Castle is a magnificently situated royal fortress located on one of the highest points in the city. The castle has been continuously in use for 1000 years and is in excellent condition. Stonehenge is an ancient stone circle located near the cathedral city of Salisbury. The Georgian architecture and Roman baths in Bath. York Minster Cathedral in the historic city of York. Canterbury Cathedral is the seat of the head of the Church of England. Shakespeare's Birthplace, Stratford-Upon-Avon, is home of the Royal Shakespeare Company. The ancient and world-renowned universities of Oxford and Cambridge The Giant's Causeway 97km from Belfast on the north coast of Northern Ireland is a World Heritage site and a natural wonder. Portsmouth Historic Dockyard is home to three of the most important ships ever built and 800 years of naval 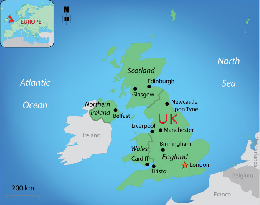